What Marine Hazards are boaters and beachgoers at risk of?

Trips to the beach aren't always fun in the sun. From strong rip currents to dangerous marine life, There is always a risk when going to the beach. 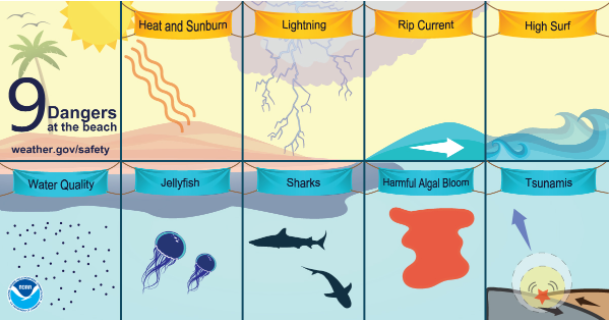 Learn more about the 9 dangers of the beach here.

Too much heat and sun can spoil a vacation. Heat is the leading weather-related killer in the United States, causing more deaths than floods, lightning, tornadoes, and hurricanes combined. The sun’s ultraviolet (UV) rays can damage your skin in as little as 15 minutes.  Heat disorder symptoms include sunburn, heat cramps, heat exhaustion, and heat stroke. Spending the day at the beach can lead to any of these disorders but the most visible is sunburn, which can take up to 24 hours before the full damage is visible. Seek medical help right away if a burn is severe, especially if it is accompanied by a headache, chills, or fever.

Ocean waves are generated from various sources. The most common are those created by the wind. These waves can occur over oceans, seas, lakes, and intracoastal waterways. Waves are constantly changing and can grow quickly. Rough seas build rapidly as winds approach gale force (34 knots or 39 mph). Under these conditions, seas are likely to build to 12 feet or more. When seas build to five or six feet, small craft operation is cumbersome and could become deadly.

As ocean waves approach the coast, they move from deep to shallow water. The wave heights begin to increase due to friction along the ocean floor. Breaking waves induce small ocean currents near the coastline that can lead to rip current development. A rip current is a powerful channel of water flowing quickly away from shore, which occurs most often at low spots or breaks in the sandbar and in the vicinity of structures such as jetties and piers. Additionally, long periods with elevated winds parallel to the coast can lead to strong along shore currents, which spawn rip currents as well. This is common in the winter months along the Florida Panhandle beaches in the wake of strong cold fronts do to moderate westerly winds.

Thunderstorms are violent, short-lived weather disturbances that can include lightning, heavy rain or hail, and strong, gusty winds. The strong gusty winds in a thunderstorm can lead to rapidly building seas and very rough marine conditions. Thunderstorms with frequent cloud-to-ground lightning often affect the inland lakes and rivers during the early afternoon. Early morning lightning storms are more common along the coast. Lightning can strike the ground or water many miles away from the storm cloud. The vast majority of lightning injuries and death on boats occur on small boats with no cabin. It is crucial to listen to weather information when you are boating. If thunderstorms are forecast, do not go out. If you are out on the water and skies are darkening, get back to land and find a safe building or safe vehicle. If this is not possible, drop anchor and get as low as possible. Boats with cabins offer a safer environment for protection. If you are inside the cabin, stay away from metal and all electrical components. Wait 30 minutes after the last thunder crack before going back to the beach. Remember, When thunder roars, go indoors!

A waterspout is a tornado over water. In Florida there are two spout types of waterspouts. The “type A” spout is a violent and potentially destructive vortex which moves quickly. These spouts often form in the spiral rain bands of approaching tropical cyclones and can also develop along or ahead of winter cold front squall lines. The second type of waterspout, the “type B” spout, is usually less violent, slower moving, and less destructive than the type A spout. This type of waterspout develops quickly beneath a rapidly building cloud line, most often during the Florida rainy season (May-October).

Where can you find Marine Weather Information?

How many people are killed each year?

On average 10 people drown each year as a result of rip currents. Surprisingly, rip currents kill more people in Florida during an average year than hurricanes, tornadoes and lightning combined. Many of these drowning incidents occur on days when the weather is quite pleasant. Tallahassee is at no risk for rip currents, but students traveling to Panhandle beaches are at risk.

How to Avoid Getting Caught in a Rip Current

Before you leave for the beach, check the official beach forecasts and/or beach advisories and closings. If visiting, you can as your hotel or rental agency for local sources of weather and beach forecasts.

Know how to swim before you venture in.

Swimming in a pool is not the same as swimming at a surf beach with crashing waves, winds, and dangerous currents. Changing ocean currents and winds can quickly exhaust your energy and strength. You should be a strong swimmer before you go into the ocean or Gulf of Mexico. Many swimming programs now offer lessons in how to escape a rip current.

Know what the warnings flags mean.

Read the beach safety signs at the entrance to the beach. Once on the beach, look for beach warning flags, often posted on or near a lifeguard’s stand. A green flag means water conditions are safe and other colors mean conditions are not safe. These flags are there to protect you. Please read and obey the posted beach signs and warning flags. 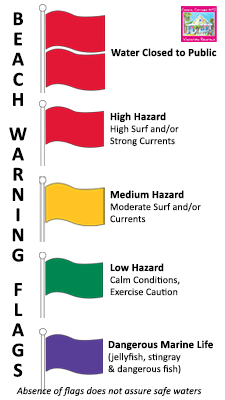 If caught in a rip current. 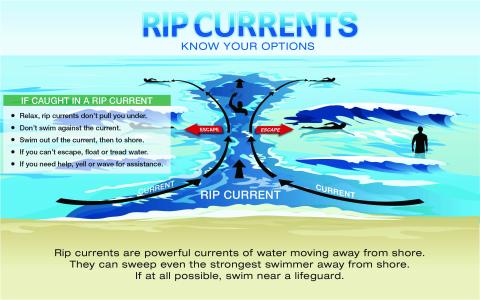 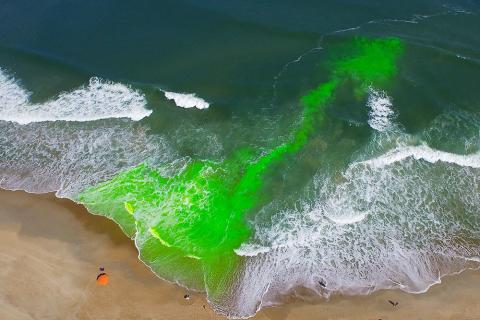 Issued by the National Weather Service when seas build to seven feet or more and small craft operators should strongly consider remaining in port.

A marine weather warning for gale force winds from a non tropical system.

A marine weather forecast for the waters between 60 and 250 miles off the coast.

Issued for brief or sudden occurrence of sustained wind or frequent gusts of 34 knots or more. This is usually associated with severe thunderstorms or waterspouts.